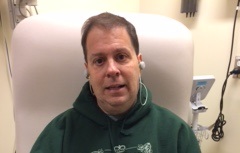 I had my stroke 14 years ago and suffered from post-stroke chronic shoulder pain. I tried anything to help with the pain. After 7 years of PT/OT rehabilitation, I said, “This is it—this is the best I’m ever going to get so I stopped. I had to just suck it up when it came to the pain.”

I tried everything you can think of though — I had a sling to stop my shoulder from moving but that was useless. I tried pain med after pain med but nothing succeeded. All of it was to no avail.

One day my stroke doctor sent me to a pain management doctor who introduced me to StimRouter. I had to laugh at first; I thought nothing can take this pain away. But I had tried everything else so I said let’s give it a shot.

Once the StimRouter was implanted, everything was pretty much OK with my pain. I can say the stimulator is working very well for me. I was programmed by the doctor two weeks after the implant and after a day of using the StimRouter system with my remote control, my pain started to go away.

I would keep it on for about two hours and then I wouldn’t need it for the rest of the day because the pain relief carried over. I was really impressed with how fast it worked.

Before StimRouter, I would say my pain went off the scale— above a ten for sure— because my pain was really bad. Sometimes it hurt to breathe. Now with the help of StimRouter, my pain is only a 2 or 3 at most.

I wear my system all day but I only turn it on every 6 to 8 hours depending on what I’m doing that day. The patches stay on well but come off just as easily. When it’s on, it feels like a massage chair on your arm.

The StimRouter works well for me; I feel very lucky. I can lift my arm enough to put on deodorant now and I’ve picked up some new hobbies. It’s a process and I still have goals like being able to ride my bike but I would recommend StimRouter to people in pain without a doubt in my mind.

I didn’t expect much at first but I was quite surprised, very happily surprised. The StimRouter is great. If anyone ever asked me I would tell them straight out, “It works and it works well for me!”

It was amazing. When the doctor turned it on, the pain went away and now all I feel is a slight tingling from my shoulder. Now I can move my arm, lift it, and do exercises with the...

I had pain in both my shoulders but we decided to try StimRouter for my left shoulder because the pain was really bad. Now I can move around and exercise my arm without any problem — I cannot complain....

StimRouter worked for these patients but individual results may vary. Rx Only. The StimRouter Neuromodulation System is indicated for pain management in adults who have severe intractable chronic pain of peripheral nerve origin, as an adjunct to other modes of therapy (e.g. medications). The StimRouter is not intended to treat pain in the craniofacial region. StimRouter is contraindicated in patients who have any active implanted device such as an implanted demand cardiac pacemaker or defibrillator, or metallic implant in the immediate area intended for implant. For complete instructions for use, storage, warnings, indications, contraindications, precautions, adverse reactions and disclaimer of warranties, please refer to the insert accompanying each product or online at www.stimrouter.com.